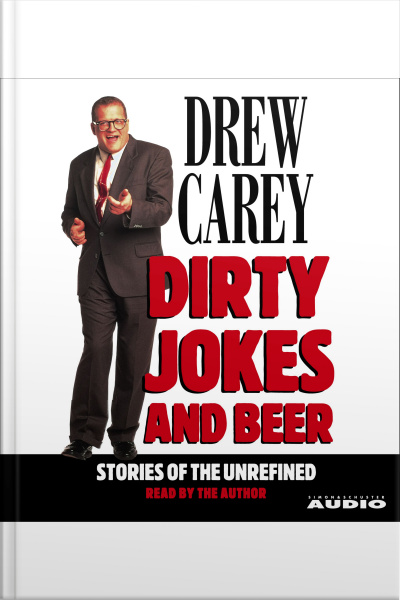 We all know Drew Carey from his award-winning stand-up career, and his hit
television show, but do we really Drew Carey, the person? In his first book, the
bawdy and irreverent DIRTY JOKES AND BEER, find out about all the many sides to
this misunderstood Hollywood star:

The Health Conscious Drew: They say that exercise and proper diet are the keys to
a longer, healthier life. Oh well...Watch for my next book, "How I Died While
Jogging."

Drew the Lover: I read the Forum letters in Penthouse thinking that I could
learn from them. I remember thinking sometimes when I was having sex, "Lets see
now. How did 'Surprised in Cincinnati' do it?"...If a Playboy Playmate said in
her questionnaire that she liked a guy in tight pants, I would go out and buy
some tight pants. If she said she liked well-endowed men with big muscles and
hairy chests, I would cry.

And Drew's formula that took him from a lonely teenager to a successful mega-
star...avoid cheap cologne and cheesy bikini underwear. Don't expect sex on the
first date, and never pay more than twenty dollars for a lap dance.

All this, plus a section that Drew calls "...kind of Drew Carey in the Fourth
Dimension [but] still close enough to the real Drew to scare me."