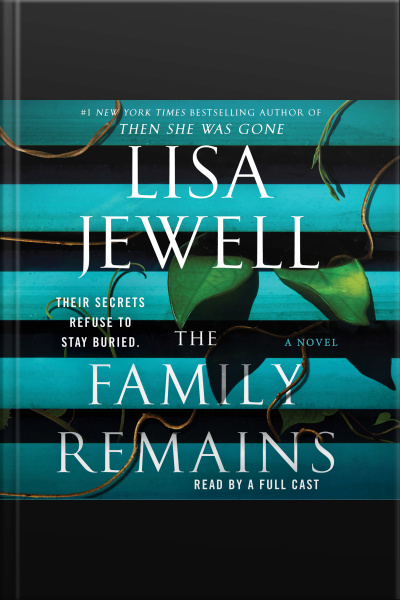 The Family Remains: A Novel

This reading group guide for The Family Remains includes an introduction, discussion questions, ideas for enhancing your book club, and a Q&A with author Lisa Jewell. The suggested questions are intended to help your reading group find new and interesting angles and topics for your discussion. We hope that these ideas will enrich your conversation and increase your enjoyment of the book.

Early one morning on the shore of the Thames, DCI Samuel Owusu is called to the scene of a gruesome discovery. When Owusu sends the evidence for examination, he learns the bones are connected to a cold case that left three people dead on the kitchen floor in a Chelsea mansion thirty years ago.

Rachel Rimmer has also received a shock—news that her husband, Michael, has been found dead in the cellar of his house in France. All signs point to an intruder, and the French police need her to come urgently to answer questions about Michael and his past that she very much doesn’t want to answer.

After fleeing London thirty years ago in the wake of a horrific tragedy, Lucy Lamb is finally coming home. While she settles in with her children and is just about to purchase their first-ever house, her brother takes off to find the boy from their shared past whose memory haunts their present.

As they all race to discover answers to these convoluted mysteries, they will come to find that they’re connected in ways they could have never imagined.

In this masterful standalone sequel to her haunting New York Times bestseller, The Family Upstairs, Lisa Jewell proves she is writing at the height of her powers with another jaw-dropping, intricate, and affecting novel about the lengths we will go to protect the ones we love and uncover the truth.

1. When Phin goes missing, Lucy reaches out to his sister, Clemency, who brings up Phin and Henry’s complicated relationship. Lucy thinks to herself “Twenty-six years is long enough for memories to grow cobwebby, abstract. Twenty-six years is long enough to doubt your recollection of things, to wonder if maybe things really did happen the way you think they happened” (69). Do you think Lucy’s questioning of her own memories is similar to Henry’s reimagining of the past? What are the similarities and differences in the ways Henry and Lucy Lamb deal with their past traumas?

2. Do you think Rachel and Lucy will continue to be friends, or do you think their bond in common is too painful for them to maintain a relationship?

3. Do you agree with Justin that Henry is “Poor Henry” and that the Lamb children were “all victims. Whatever happened inside that house, none of them deserves to be punished for it” (340)? Cite examples as to why you do or do not believe Justin’s assessment.

4. Lucy thinks to herself that she “hates herself for putting Libby in this position, for coming into Libby’s blameless, uncomplicated life and tainting it with subterfuge and darkness” (347). Do you think Libby would agree with this and resents her birth mother? Do you think Lucy is able to forgive herself by the end of the novel?

5. When Detective Owusu lets Henry go, Henry has a desire to be reunited with his family and go home. Were you surprised by Henry’s reaction here? What did you think Henry was going to do in this situation?

6. During her police interview, Lucy tells Detective Owusu that she “should have killed [Birdie]. If I had killed her, I would have been proud” (367). Does this change your perception of Lucy as a character?

7. Toward the end of the novel, Henry “recalibrates” Birdie’s murder just as he reimagined his parents’ murder and his own identity many years ago. How is this recalibration different from Michael’s gaslighting of Rachel?

8. Were you surprised that Lucy helped the police find Henry in Chicago. Why do you think she helped them? Would Henry have done the same, if their roles were reversed?

9. In Justin’s suicide note, he says that Henry had “Such a strong sense of right and wrong. More than anyone else in that house Henry knew where the moral high ground should be and was constantly begging the grown-ups to try to find it” (407). Do you agree with Justin’s evaluation of Henry? Do you think Henry skirts the moral line so well because he understands where the moral high ground should be? Or do you think Justin is exaggerating here to help clear Henry’s name?

10. What was your reaction to Michael’s death being deemed an organized crime murder? Were you expecting Lucy or Rachel to be held responsible for it?

11. For many years, Henry blaming himself for making Phin sick with a love potion, but when the two men reunite, Phin tells Henry, “I wasn’t ill from your love potion, Henry. I was ill from malnutrition. From dehydration. It was their fault I was ill. Not yours” (427). Do you think Phin is right to fully blame the adults, or do you think Henry is responsible for some of the harm that occurred in the house?

12. At the end of the novel, Henry takes on characteristics of the man he met in Chicago, Kris Doll. Why do you think Henry, despite his previous moment of clarity about his self-worth, begins to take on this new identity? Do you think his obsession with Kris is ominous, or simply due to the trauma he experienced as a child?

14. Do you think Henry will ever be able to live as his true self, without adopting anybody else’s personality traits? Why or why not?

1. If you’ve not yet read THE FAMILY UPSTAIRS, choose it for your next book club pick and discuss as a group how the story both functions as a sequel and stand-alone novel. How does reading THE FAMILY UPSTAIRS enhance your understanding of THE FAMILY REMAINS?

2. What do you think happened after Phin arrived at Lucy’s home? Write a chapter from the perspective of one of the other characters about how the reunion went.

3. Find out more about Lisa and her novels by visiting www.facebook.com/LisaJewellofficial, or follow her on Twitter @lisajewelluk.

A Conversation with Lisa Jewell

Q: What were you most excited to return to in writing a sequel to THE FAMILY UPSTAIRS?

A: I think you would not be at all surprised to guess that I was most excited to return to the voice of Henry and to find out what happened when he and Phin finally had their reunion! But I was also worried that I would miss the joy of bringing new characters to life on the page, so once Rachel Rimmer and Samuel Owusu arrived on the scene, that’s when the book really came alive for me.

Q: What were some of the challenges you faced writing a sequel?

A: So many challenges. So many. I shan’t be writing another one, let me put it that way. The most challenging aspect was trying to provide enough detail from the first book for a standalone reader to know what was going on, without clumsily info-dumping every few pages. The second most challenging aspect was not being able to tinker with the first book so that it would fit better with things I wanted to do with the second book! As a writer you’re so used to being able to go back and change things to make the book work better, but with a sequel you’re stuck with things you wrote years earlier and there’s nothing you can do about them

Q: Did reader reactions to the first novel influence how you wrote this second novel at all?

A: Absolutely. I always pledged that I would never write another sequel after I wrote After the Party, the sequel to my first novel, Ralph’s Party. I hadn’t enjoyed the experience and didn’t like the resultant book and thus was very adamant at first when readers were asking for a sequel to The Family Upstairs that I would not do one. But as the weeks and months passed and the pleas kept coming, I started to wonder about Henry and Phin and what might be happening in Botswana and then I wondered about Michael Rimmer’s wife, Rachel and then I wondered what might happen if someone found Birdie’s remains and then I thought, you know what, let’s give the people what they want, but make it something that I will really have fun writing. So I did.

Q: You must have felt you knew the characters pretty well when you started writing this follow-up, but as you wrote, did they develop in any ways that surprised you?

A: They certainly did! Especially Phin. I really had no handle on Phin at all. He was an absolutely enigma in the first book. In particular, I had no set idea about his sexuality. I had always sort of assumed that he was gay, but it wasn’t until I started to write the scenes in Chicago that I found my way to who he really was, and by the end he had surprised me. I think he needed to be less ambiguous than Henry, to balance out that slipperiness of his nemesis. He needed to be solid and absolutely at one with himself. I was excited to get to the last scene which I knew I would write from his point of view, and to be inside his head for the first and only time. I liked him very much, more than I expected to. Henry surprised me too, by not being as malevolent as I’d imagined he was going to be. But as I say, there's still potential for him to go darker!

Q: Why did you decide to have the Lambs leave London? What intrigued you about showing them away from home?

A: I knew that Henry was going to leave London of course, from before I wrote the first word. The whole impetus for the sequel was to show him finding Phin who was very much in Botswana at the end of the first book. I had always assumed that Henry would go to Botswana, but I changed tack at the last minute and sent him to Chicago instead. I didn’t decide until halfway through to send Lucy after him, but realized their stories needed to align more closely as the book developed. So it wasn’t a case of wanting to show the characters away from London, it was more that they could not feasibly be in London in order for it work as a sequel to the first book.

Q: After Henry is caught by the police and then let go, he thinks to himself, “Chicago has healed me . . . When I get back to London, I will reclaim my identity. I will reclaim Henry Lamb. I will own the little boy who I last saw looking at me in a mirror in a Chelsea townhouse all those years ago (393). Do you think Henry will ever really be healed? Do you think he can actually reclaim his childhood self and live as Henry Lamb?

A: I do not believe that Henry will ever be healed, no, and in the corners of my mind I see a dozen more adventures for Henry to have in various guises. He could be a real Tom Ripley if I were prepared to revisit him. I also do still believe he could kill again, in certain scenarios! But I think I will leave him there, in the corners of my mind. It is time to move on from Henry now.

Q: Why were Birdie and Michael’s murders the crimes you wanted to focus on for this follow-up novel? What about them made for good entry points into revisiting the Lamb family?

A: As I mentioned earlier, I didn’t really want to do a sequel. I like starting each new book as an empty canvas and filling it with new and exciting things.