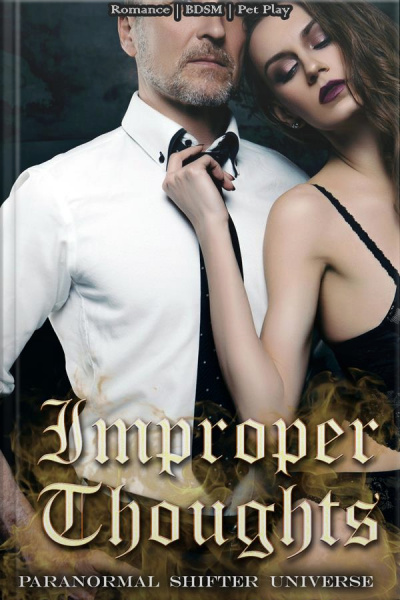 Nigel knows it's wrong. He sees the young rabbit shifter that his young nephew is dating and knows that Ari is not meant to be his. He can't help it. She is always there, looking so perfect in her cute little sundress, so comfortable in his presence that she does not try to hide the rabbit ears from him. Perhaps his nephew and he could learn to share.

"Are you sure Uncle Nigel says he wants us to move?" he hears her ask.

He does the first thing he thinks of, which is to hide in the walk-in closet and close the door as quietly as he can.

"You like Uncle Nigel too, don't you?" She sounds so innocent with the question too, as though she hadn't spent the night earlier in his lap.

"Not the same way as you, darling," he responds. There's a fond smile on his lips, like the thought of her wanting him doesn't bother him. It's a peculiar thought, one that makes him wonder about its implications. Wolves don't normally share their mates, but he's heard about polygamous relationships amongst rabbit shifters often. Their high sex drives mean they usually take more than one lover at a time.

"Did he say anything to you?" she asks, timid and unsure.

He wonders if she will tell him about what she tries to do the day before. Would she be too embarrassed to admit it. To his surprise, she continues.

"I went to find him yesterday, after the girls and I went out drinking," she admits before he could answer. "I um... I asked him to something inappropriate."

He hears the low growls from the other wolf and the swift sound of someone being pinned hard against the wall, followed by her sharp gasp.

"You belong to me," Ryan snarls.

Nigel feels his fangs lengthen in his mouth, pricking his lips. He almost gives himself away, but Ryan reacts first.

"You know what I am. I told you since we were kids that you would have to share me."

Nigel inhales sharply. So, his dear nephew isn't as ignorant as he thought. It's why he has been hesitant to mate her properly. He knows that once she has a taste, she would want more, crave more than he is able to give... and he is not ready to share her just yet.

"You are?" she asks, sounding so uncertain.