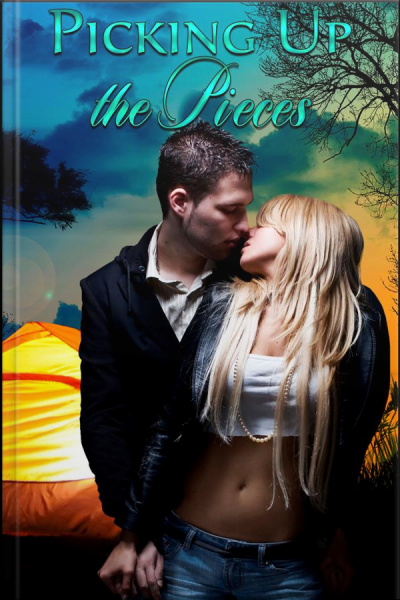 Picking Up The Pieces

Madison is utterly shell-shocked when she catches her husband banging his bubble-headed secretary. Desperate to figure out her messed-up life, she retreats to her favorite campsite for the weekend. But unexpected sparks flare when a tall, lanky ex-Marine intrudes on her solitude, then saves her from a wild animal attack. Is she ready to pick up the pieces of her shattered life with sexy Brian?

Rising, he kicked dirt over the fire and reluctantly headed for his camper.

She did, and cursed Frank under her breath for being able to climax so damned easily. It had always taken her a long time, with a lot of foreplay on his part, because he'd never lasted very long once he was inside her. He'd told her once it was because she was so sexy, so exciting. No man could possibly last more than a few minutes with a woman who was so incredibly hot.

She'd been flattered enough to swallow her frustrationbecause she'd barely even started to feel good by the time he was rolling off her with an exhausted groanand tried to accept the fault was hers.

But what if he'd been right yesterday morning? What if she really was frigid? That was a lot easier to believe than some extravagant claim that she was a sex goddess. If she really was, he never would have turned to Fannieand God knew how many other women before that.

Who the hell named their daughter Fannie anyway? Why not hang a sign on her neck that said, Bimbo for hire, cheap by the hour!'

Her arm was aching and her body was drenched with sweat by the time she finally managed to nudge herself over the edge. She softly moaned as sweet pleasure whispered through her veins, and fell back with a weary sigh. No question about it, sex was a pleasant diversion even when she had to do the honors herself. But it never should have been the defining factor in whether her marriage succeeded or failed.

Maybe that should tell her something.

Well, that problem would be easy enough to fix. She'd caught him red-handed, so he couldn't contest a divorce. They didn't have any kids or even any pets to fight over. The house could either be sold, or he could give her a cash settlement equal to her half of the proceeds. He could afford that; his job paid well.

He could keep everything else. She didn't want the furnishings they'd bought together, or an alimony payment. She didn't want anything at all that would remind her of the years she'd spent being decent and faithful while he'd been off gallivanting and lusting after every other woman on the planet!

The most important things she ownedher clothes and her camera equipmentwere safely in the back of her car. What else did she need?

Except when she stopped fuming about Frank, her troubled thoughts spun unerringly toward Brian. That left her feeling restless and itchy again...and too tired to try purging that unwelcome longing a second time.

Damn, damn, and damn! Why had he had to stumble onto her private little campsite?