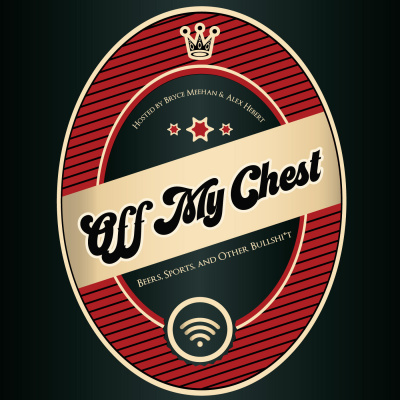 Off My Chest Podcast

In the episode we're talking about a plethora of amazing things. Well maybe, maybe not. We touch on Alex's crazy movie/dream idea. Can't figure out the movie with Ryan Reynolds and Ben Kingsley. It was "Self/Less" by the way! On the sports front we talk about the wrestler Kane trying to become mayor of his town. Matt Ryan's incredible guarantee to play the game and what the Pittsburg Steelers did for Ryan Shazier. Also going through this year's Kentucky Derby racers. Then there's the bullshi*t part. So sit back. Grab a beer and join the guys in some "Beers, Sports, and Other Bullshi*t" Thanks again for listening. Don't forget you can write us at **omcpod@gmail.com** or tweet us **@OMCPOD** on twitter! We'll talk about it on the next episode. Hosts - **Bryce Meehan:** @brycemeehan **Alex Hebert:** @ratpacker99 Don’t forget you can listen to us on all major platforms. Spotify, Apple Podcasts, and Google Play